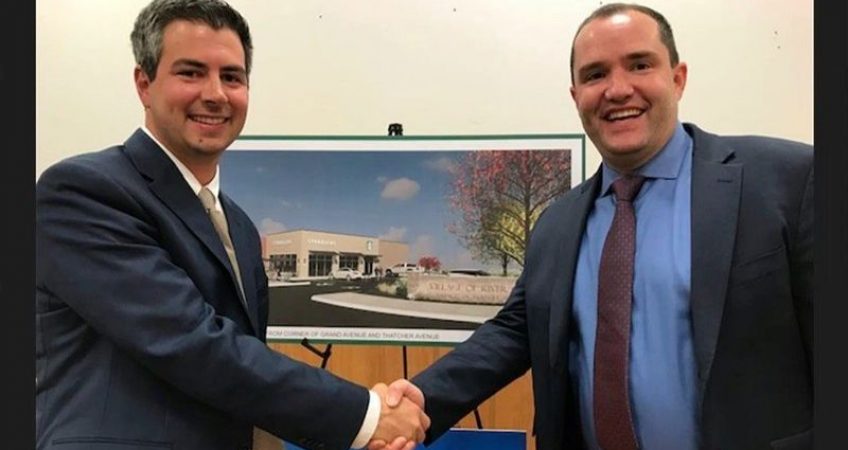 ‘We couldn’t think of a better business to put on that corner’: Starbucks coming to River Grove

River Grove officials have entered into a redevelopment agreement to bring a Starbucks coffee shop to the corner of Grand and Thatcher avenues, a high-profile move expected to bring momentum to the village’s economic development efforts.

Village board members voted unanimously Oct. 18 in support of an agreement, with Avalon Equities River Grove LLC, for the redevelopment of village-owned parcels and part of an alley at 8359 Grand Ave.

The parcels, which sit in the Grand Thatcher Tax Increment Finance District, will be conveyed to Avalon, which will construct the village’s first Starbucks on the site. The project calls for construction of a roughly 2,300-square-foot retail coffee shop, which will include adjacent parking and a drive-thru.

River Grove Mayor David Guerin said village officials have been working with Avalon for some time.

“I can tell you from a municipal perspective, we couldn’t think of a better business to put on that corner,” he said. “I think it will spark economic development and make River Grove even a better place to live.”

The project marks a second major breakthrough for officials who have made an aggressive push to brand the area as transit-oriented — located within walking distance of the village’s Metra station. In 2017, village trustees approved a high-end residential housing project at 8465 W. Grand Ave., with luxury apartment buildings going up on what was a long-vacant bowling establishment.

The Starbucks development should prove a boon to the wider area, predicted Jonathan Zivojnovic, managing broker at River Elm Properties and past president of the Grand Corridor Chamber of Commerce. Zivojnovic was in attendance at the meeting.

From the chamber’s point of view “this is going to be yet another gateway location on our Grand Corridor,” he said, “and can be a starting point and foundation for the whole corridor development to come.”

Businesses build off one another, he noted.

“The traffic count this is going to bring to the corner will single-handedly increase all the property values that surround it substantially,” he predicted. “Once that happens, the neighbors should be ecstatic.”